Our PH watches as my son inspects the results of his morning’s hunt, a record book black wildebeest bull.

I set my son loose on the plains, plateaus, and hills of Namibia. I wanted to see what he would do.

As long as I can remember he has been going afield with me. Over the years our relationship has reminded me of the one between other predators and their young. At first, they are nurtured in the den; the food is supplied and the young are fed directly. As the pups get older living but wounded food is brought in to be eaten.

At this stage, the young play with their food for a time until instruction and instinct teach them to kill it for themselves. For the past five or six years, this is the stage my son has been at. He has been led by me to his food and closely instructed on how to deal with it in every aspect. I did the work, enforced gun safety rules, made sure packs were filled with water and rations and provided the equipment and expertise required to handle the environment and the kill itself.

But as time progresses the pups are no longer provided for and are expected to participate fully, under the watchful eye of the pack, in every aspect of the hunt.

In hindsight, there is no better place to let a young hunter fully stretch his legs and fill his boots than in a place like Namibia.

It is a land of contrast; vast, empty, dry, harsh and as unforgiving and punishing in its natural splendor as the highest peak in the Rockies or the furthest reaches of the Arctic. But at the same time, it is also a land of plenty.

It is a place teaming and crawling with life, life that is abundant beyond the imagination of the uninitiated. The land buzzes and bursts at the seams with game that has evolved not only to survive the harsh conditions that Namibia embodies but to thrive in them. Every corner, every fold, every plain or bush is home to beast and fowl.

It is empty but alive. It is a hunter’s paradise. 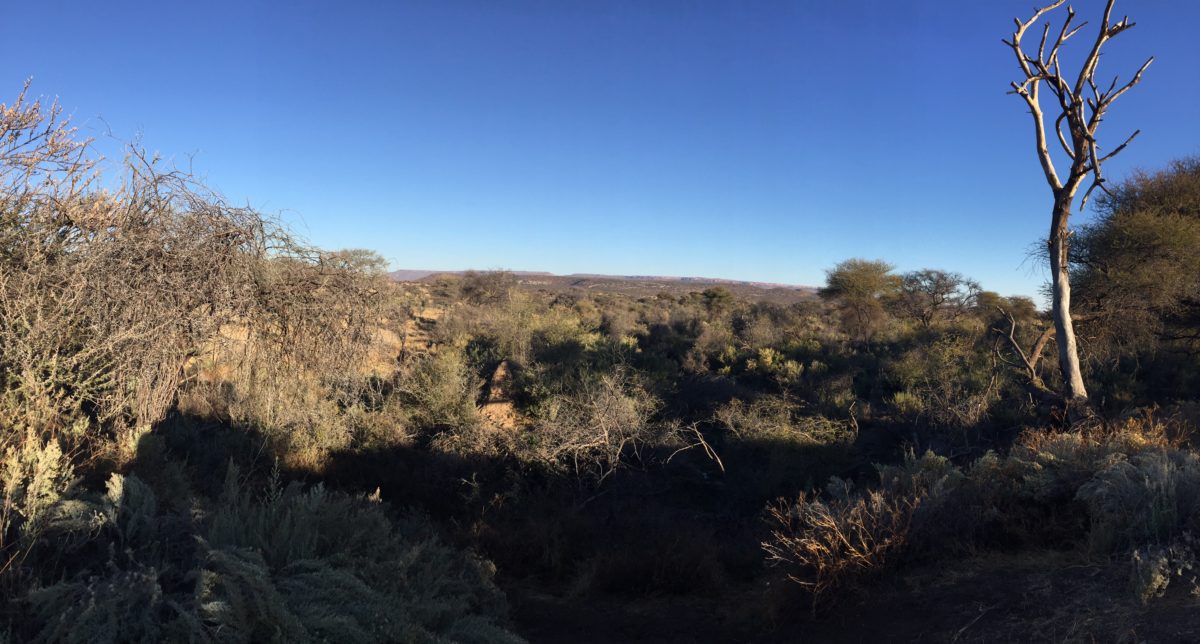 The Namibian bush. It sticks, pokes, tears and bites.

So I set him loose in the happy hunting grounds, with his rifle in hand, to see what he would do.

I gave him maximum latitude or at least as much as I could afford. At first, he was tentative. Before we arrived he was unsure what to expect. He thought, maybe he would hunt a waterbuck. And maybe a black wildebeest. “That would be good enough”, he said.

I smiled and shrugged. “Do what you want. It’s your hunt,” was all I’d reply. He’d think about it then raise an eyebrow and say very little. He was skeptical.

Of course having been before I knew that Safari is about opportunity and choices. I wondered what he would see as we all view these things differently. I pondered the question: how deeply do my genetics run through his body and questioned, for a moment, whether I was setting a pup who wanted to be fed or a predator willing and able to feed itself, free among the bushes and thorns of Africa?

In this day and age, many would see such a passage as archaic or barbaric but I believe the problem lies not within my perspective but within the age in which we live.

A disconnect between reality and our civilization has bred individuals who refuse to accept the natural world, their mortality and even their biological reality for what it is. The result, of course, is that it has created huge swaths of human beings who have a deep contempt for real life. There is a sickness in our world that stems from denying reality and avoiding the truth in life’s natural cycles. The irony being that in avoiding thinking about our mortality we end up living in death’s shadow; we become empty shells, neither truly alive or aware and always, perpetually living in denial and fear.

An acceptance of the natural world, its cycles and the mortality of all things should breed an understanding of death and a respect for life. It should free us from fear, thus liberating our minds and lead us to a sense of reciprocity towards others.

Indeed, I have never felt that it has been sufficient to have children that will simply ‘ponder pi’. Academics do not teach us how to live in this world nor are they sufficient in and of themselves to help us survive.

A man, at least in part, should look to nature to understand himself. Yes, he should have the inquisitiveness of a philosopher and the mind of a mathematician but he should also strive to have the body of an athlete and the heart of a predator. None of these things is sufficient on its own, character being like a chain, is only as strong as its weakest link.

My weak links, as I get older, are in ‘pondering pi’ and keeping my body fit. I believe this is why we have children, our jobs as parents being to sharpen them and hone them like fine steel so that they too may carry on. Lather, rinse, repeat as they say.

And so we teach them, then release them and look on.

He called out the lone bull to our PH on his own. He’d spotted it in the distance on top a grassy plateau. We’d missed it, of course. Old eyes, perhaps?

We followed it for some time as it danced back and forth across the plain in front of us, always just out of range, never still enough for him to pull the trigger.

I would have shot it several times over but this wasn’t my hunt, it was his. I had told him before we left that whatever he did on this trip he would own, one way or the other. Apparently, he had heard and understood.

After half an hour of waiting and closing the distance, the bull stood still, quartering towards us, just long enough for me to silently whisper ‘bang’. In my mind I was thinking, yelling, “Kill It!,” but I kept silent.

When his rifle finally responded 165 grains of lead entered through the bull’s front shoulder, breaking and shredding the lungs as pieces of copper and lead fragmented then spread upwards into its spinal column, dropping the old boy at or near ‘the speed of gravity’.

As the wildebeest hit the ground my son ejected the spent round from his chamber and rifled another in immediately, as I’d taught him, then stopped to assess the situation through his scope. When the bull didn’t move he flipped on the safety and walked slowly in on the black mass laying in front of him with Sean and me in tow. Our PH said he was deliberate. It was meant as a compliment, I think. He told me he was happy that my son did not rush and wound game. I nodded, kept my mouth shut and stood back for a moment.

When he was younger I would have told him I was proud of him and gave him a hug. This time I waited then stuck out my hand and shook his. I simply told him, “Nice shot.”

He smiled and knelt down to run his hands through the bulls black mane and over his hardened boss.

“I think I’ll put his skull on my bedroom wall. The tail is unique. I want it too.”

“Let’s see what happens,” I replied, “no need to rush or be greedy. We’re here for a while.”

A herd of springbok gathered nearby as we gutted the old bull and the sun began to heat the mid-morning air. It was time to hang the wildebeest and go for lunch, then maybe a nap.

I’d learned when I was younger that one never hurries such things. Not while you’re hunting…

In the Garden of Eden.